The North West Region of the BHUDRH’s regional territory consists of the towns of Bourke (our regional headquarters), Brewarrina, Cobar, Lightning Ridge and Walgett.

The north west is made of up the Far West and the Orana regions of New South Wales, which together make up nearly 50% of NSW’s land area but only about 1% of the state’s population.  Many of the towns in this region have no more than 5,000 people, and surrounded by stunning regional parklands, ancient Aboriginal history and classic outback experiences. 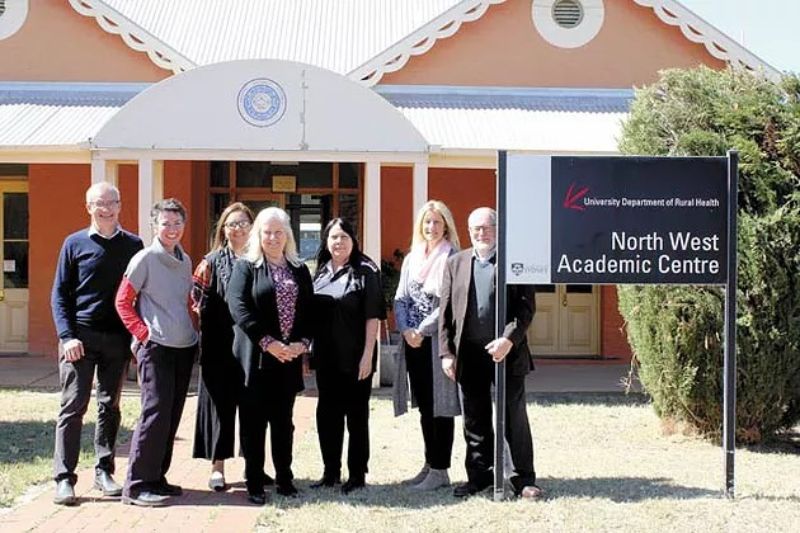 A team from the Rural School of Health has visited Bourke to outline changes which will mean Bourke students can complete an entire medical degree at the Dubbo campus.

The Rural School of Health is part of the Sydney University’s medical faculty and until now has been able to offer only one of the four years of study at Dubbo.

From 2021, the Dubbo campus will have the staff and facilities to see a medical student from enrolment through to graduation.

Bourke Shire is situated in Western New South Wales at the crossroads of the Mitchell Highway, Kamilaroi Highway and the Kidman Way. With an area of 43,000 square kilometres, the shire is home to many small villages and is considered a gateway into south west Queensland and the far west of New South Wales. It is home to approximately 3,000 people.

Bourke's prosperity is built around the pastoral, irrigation, tourism and service industries which are strongly supported by a wide range of attractions and activities.  At one time, Bourke was the world's largest inland port for exporting wool.

Cobar Shire is situated in the centre of New South Wales at the crossroads of the Barrier Highway and the Kidman Way and has excellent road, rail and air links to most of Australia's capital cities. With an area of 45,609 square kilometres, the Shire is approximately two-thirds the size of Tasmania.

Cobar is home to approximately 4,969 people. The Shire's prosperity is built around the thriving mining - copper, lead, silver, zinc, gold and pastoral industries, which are strongly supported by a wide range of attractions and activities, that make it a major tourist destination.

On placement in the outback

A group of four nursing students from Southern Cross University spent three weeks in Cobar as part of their course. The group worked with the school community to design and implement a health prevention and education program aimed at teenage girls. Read more about On placement in the outback.

Brewarrina (locally known as "Bre") is a town in North West New South Wales, on the banks of the Barwon River in Brewarrina Shire. The name Brewarrina is derived from 'burru waranha', a Wayilwan name for a species of Acacia, Cassia tree, "Acacia clumps", "a native standing" or "place where wild gooseberry grows".

Walgett is a town in northern New South Wales and the seat of Walgett Shire. It is near the junctions of the Barwon and Namoi rivers and the Kamilaroi and Castlereagh Highways. In 2011, it had a population of 2,267 including 1,004 Indigenous persons and 1,073 non-Indigenous Australian-born persons.  The balance of the population were born overseas.

Walgett takes its name from an Aboriginal word meaning 'the meeting place of two rivers'. It is a regional hub for wool, wheat and cotton industries. It is the gateway to the New South Wales opal fields at Lightning Ridge to the north and The Grawin to the west. The main crop farmed in the district is wheat; however, the drought has caused an increase in the farming of lucerne and other good hay crops.

Lightning Ridge, also known as the black opal capital of the world, is a rural town in north-western New South Wales with a population of approximately 4,501 (2011 census). Lightning Ridge is situated in the Walgett Shire, near the southern border of Queensland, about six kilometres east of the Castlereagh Highway, and is served in commercial activities by the town of Walgett, some 75 km to the south.

Lightning Ridge is a flourishing tourist town with numerous caravan and camping parks, the previously very rustic Diggers' Rest pub and a well-appointed bowling club with its eight artificial-grass bowling greens. Temperatures in summer can reach into the high 40s Celsius, but below ground the temperature remains continually at around 22 degrees, year round.

If you would like to find out more about clinical placements in the North West Region, please contact Cheryl Swinton (02) 6870 2663.